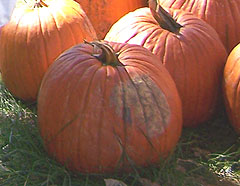 One Republican called it a “tax on fun.” Now that the 2008 Halloween holiday is done, it appears the “pumpkin tax” is history, too.

A few weeks ago the Iowa Department of Revenue sent an advisory to retailers around the state. If they were selling pumpkins, they had to charge sales tax because the pumpkins were most likely to be used as decorations.

But if customers claimed they were making a pie or some other food item from the stuffing inside that pumpkin, they could file a claim with the state for a refund of the sales tax they paid on their orange orb. Just before six o’clock on Halloween night, Governor Chet Culver issued an order calling the pumpkin tax “ridiculous.”

Culver said the agency had made the decision to tax pumpkins last December — right before he took office — and he didn’t know anything about this caper. Culver told the Department of Revenue to “do the common sense thing” and stop collecting the pumpkin tax and make any refunds that are requested from those who paid it before Halloween.

House Republican Leader Christopher Rants jokingly had warned that if Culver’s administration was going to tax Halloween pumpkins, then watch out next spring because they’ll try to tax Easter eggs.