Grammy Award winning musicians and sports champions mingled with the crowd, but the focus of the more than 9,000 Democrats who gathered in Des Moines Saturday night was on the six presidential candidates who spoke at the Iowa Democratic Party’s annual Jefferson-Jackson Day dinner.

“All of the eyes of the world are on this dinner tonight and you know why? Because they know they’re going to hear from the next president of the United States,” emcee Nancy Pelosi, the U.S. House Speaker, told the crowd shortly after eight o’clock.

More than an hour before the program began, groups of supporters were chanting, clanging noise-makers and waving signs.  Barack Obama’s supporters rigged up huge red and blue signs at the top of the arena. Joe Biden’s staff arranged ears of corn in centerpieces at the tables where Biden supporters were seated for the evening meal. 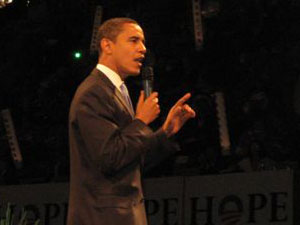 Five of the six campaigns held events late in the afternoon to rally their supporters.  Musician John Legend performed for a crowd of Obama backers, many wearing red t-shirts provided by the campaign.  Obama told the crowd he was saving his voice for his speech later in the evening, yet Obama ended with a rhetorical flourish that sounded a bit like Howard Dean’s speech on Caucus Night 2004 — but without the scream at the end.

John Edwards spoke to a gathering of his supporters after a performance by Dr. Ralph Stanley, a bluegrass legend.  Edwards promised his backers he would “give ’em hell.”

“I have been fighting this fight my entire life,” Edwards said.

Bill Richardson held a reception for supporters that featured Al and Bobby Unser, a racing duo that has won nine Indy 500 championships. “I do want to assure you that neither one of them will be advising me on fuel efficiency standards,” Richardson joked. 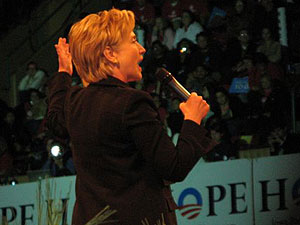 Hillary Clinton did not host a reception or rally for supporters before the dinner.  Celebrities Quincy Jones, a music industry legend, and Billie Jean King, the tennis champ, were Clinton’s star guests at the banquet.

By 10 o’clock, only three of the six candidates had spoken to the crowd. “Thank you and welcome to breakfast in Des Moines,” Chris Dodd joked at the start of his remarks.

“You’re going to go to the Caucus on a cold January night…and my last message to you is….trust your heart,” John Edwards, the first candidate to speak, said at the conclusion of his remarks.

“George Bush gone forever — that is the American dream,” Bill Richardson said, to cheers during his time at center stage.

As the candidates were introduced to the crowd, it was apparent Obama had the largest group of supporters in the hall.  Joe Biden jokingly questioned whether Obama’s entire cheering section was made up of Iowans.

“Hello folks, how are you?” Biden said when he reached the stage and then he turned to the Obama fans in the audience.  “Hello Iowa and hello Chicago.  Come on.  Have a sense of humor.”

Clinton took the stage at about 10:45 p.m. and seemed to be responding to Democrats who’ve raised concerns about whether she can be elected next November.

Obama, the last to speak, struck an optimistic theme even as he warned the Democrats of the potential of a general election loss with Hillary Clinton as the party’s nominee.

“If we are really serious about winning this election, Democrats, then we can’t live in fear of losing,” Obama said.  “…I don’t want to spend the next year or the next four years refighting the same fights that we had in the 1990s…Let us reach for what we know is possible…an America that believes again.”

Click on the audio link below to hear the evening’s highlights.