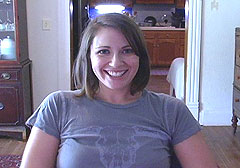 An Iowa City filmmaker is releasing what he says is the first feature film produced in the "blog" format and made specifically for release on the popular website YouTube.com. "Jenny’s Blog" starts out as a video diary of a young nurse who’s just moved to rural Iowa with her husband, a writer looking for serenity. Her segments are posted online daily to keep in touch with far-flung family.

Writer-director Bruce Heppner-Elgin says, "In the very beginning, we started kind of of viral marketing campaign saying that this was real and we fooled quite a few people." Unlike other fake blogs, Heppner-Elgin says this one has a distinct storyline. He says one problem with other famous fake blogs, like "lonelygirl15," is that they stretch on and on and nothing really ever happens or builds and you can lose interest in it quickly, but "This one, there’s a beginning, there’s a middle and there’s an end coming up soon, too."

Heppner-Elgin, a University of Iowa graduate, says the initial plot revolves around Jenny coping with the lack of excitement in country living — and it quickly changes. He says, "At first, her posts are all about how boring it is there and how there’s nothing to do and how she misses the city and pretty soon something starts to happen in the town and things aren’t very boring anymore and that takes it to the story that’s going on right now." Here’s a big hint — her neighbors are flesh-eating zombies.

Heppner-Elgin, a Des Moines native and co-founder of the Iowa Digital Filmmaker’s Guild, says they’re getting tens of thousands of computer users who are following the story daily. The story began webcasting in late October and is continuing with new segments daily. Jenny’s YouTube page .