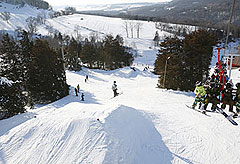 At least two of Iowa’s four ski slopes could be open for business this weekend. Ken Slaba, office manager at Seven Oaks in Boone, says their snow machines have been operating nearly every night since Thanksgiving. He expects two of the Seven Oaks’ slopes to open on Saturday.

Slaba says it’s been cold enough over the last week to make good snow. There are two major factors needed for quality artificial snow-making. "Cold temperatures and low humidity," Slaba says, "the wind isn’t necessarily as bad, but it’s just – where we’re trying to focus the snow right now – it’s been a little bit difficult the last couple nights." If the weather cooperates, Seven Oaks will open one full week ahead of last year.

Slaba says the man-made snow won’t be as light and fluffy as the real stuff, but they’re grooming the white powder so the slopes are ready for skiers, snow boarders, and snow tubers. Sundown Mountain Resort near Dubuque is also scheduled to open this Saturday. Officials with the Mount Crescent Ski Resort near Council Bluffs say they hope to open by the middle of next week. Sleepy Hollow in Des Moines is set for an opening day on December 8 or 9.