You are here: Home / Recreation / Entertainment / Iowa woman returns with the Rockettes as director 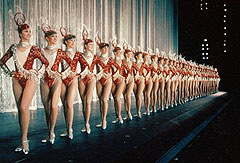 An Iowa woman is directing the nationwide touring production of the Rockettes in the Radio City Christmas Spectacular, which makes its Iowa debut this week.

Julie Branam is a West Des Moines native who spent more than a decade high-kicking as a Rockette before becoming the director.

The famed New York-based dance troupe will open its show Thursday at the Civic Center of Greater Des Moines — on the same stage where Branam performed with the Des Moines Ballet company as a girl when it first opened in 1979. "It was really a fun, exciting night. We packed the theatre. It was standing room only and lots of curtain calls," Branam says, "I think it was the only time the ballet company totally filled that place. I haven’t been there since I moved to New York so I’m really excited to get back to the theatre."

At age 20, Branam first went to New York City on what was supposed to be a month-long dance program. Soon, she was auditioning to be a Rockette. She says, "When I got off the plane from Des Moines, the first place I went was Radio City Music Hall. Never in a million years did I dream I would end up dancing on that stage. I was with the ballet company then. The director of the company met us and we got tickets and we went to see the Rockettes at Radio City. I’d always been a ballet dancer and not taken a lot of tap so I kinda’ learned on the job."

While she has many fond memories of her 14 years as a Rockette, Branam says it was a physically-demanding job. While some dancers today maintain a very regimented diet and exercise schedule, she says she didn’t have to be so strict back then — especially doing 15 shows in a weekend.

"When you have five shows a day starting at 9 A.M., our half-hour call would be at 8:30 A.M. and we’d be having another half-hour call at 8:30 P.M., pretty much no need for exercise. Changing costumes and being on stage was our exercise, " She explains. The Rockettes will be in Des Moines December 6 through the 30th.