You are here: Home / News / State digging out again after second major snowstorm 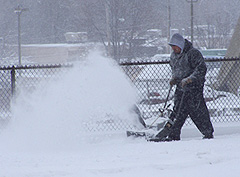 State troopers say travel is not advised across parts of central and southern Iowa, including sections of Interstates 35 and 80, from Des Moines to the Missouri border.

Heavy, wet snowfall of between eight and 11-inches is coating the region. Miles Schumacher, a meteorologist at the National Weather Service, says parts of southeast Iowa are getting a double-whammy from winter:

Oskaloosa got between ten and 15-inches of snow on Sunday and the same area is reporting another 11-inches this morning, so Schumacher says, “Two feet in three days, that’s pretty respectable.” Dozens of schools are closed, including Iowa’s largest system, Des Moines. Much of the heavy snow is slacking off now and turning to flurries and he says the deepest totals are in southeast Iowa.

Schumacher says there will likely be some areas reporting 12-inches of snow from this latest storm but southwest and south-central got some heavy snowfalls, with ten to 11-inches in Poweshiek and Marion counties, and around the town of Lamoni.

A Winter Storm Warning is expected to expire at noon for Iowa’s southeast half, as he says the snowfall is starting to subside. He says the snow is tapering off from the northwest and the heavy snow is about over with in central Iowa, though the southeast third will still get more through the morning, though it should be mostly over by noon. For more details, call 5-1-1, visit the  DOT’s road condiditions website.