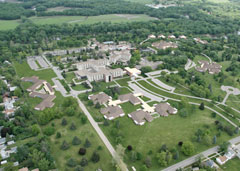 The U.S Department of Veterans Affairs is sending millions to Iowa for construction at the Veterans Home in Marshalltown. The home is to be expanded and existing facilities will under renovation.

"In the first round we got $27 million in federal funding from the federal government," says Brad Anderson, a spokesman for Governor Chet Culver. "That, combined with $15 million in state funds will provide a pretty decent amount of money for the first phase of this program to renovate the Marshalltown veterans home."

Governor Culver’s asking legislators to set aside another $20 million in state money for the final phases of the project. "It is an aging facility and it does need help and when it does get this funding it will be one of the best veterans homes in the entire country," Anderson says.

Once the $100 million renovation and expansion is done, there will be a 132-bed nursing home and other improvements.