You are here: Home / News / Emmenecker completes unlikely story, walk-on to MVC Player of the Year 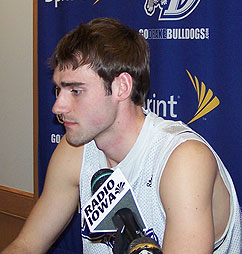 Coming into the season Adam Emmenecker just wanted some playing time. Tuesday, Drake’s senior guard was named the Missouri Valley Conference player of the year after leading the Bulldogs to a 25-4 record and the Valley regular season title.

Emmenecker set a single season record for assists. Emmenecker credits the Drake system that has shooters on the perimeter that opens up the lane and opens up passes back out.

Emmenecker spent most of his career as a walk-on and was offered a scholarship prior to this season.  Emmenecker remembers being offered scholarship as school started this past fall, and was told by coach Keno Davis that it didn’t guarantee that he would get playing time. He says it was an honor to achieve scholarship status.