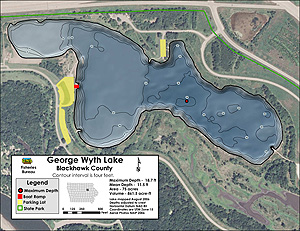 Fishing on some Iowa lakes could get a little easier this spring and summer as the Iowa Department of Natural Resources has completed new maps showing their contour below the depths.

D.N.R. fisheries biologist, Mike Hawkins, works at Spirit Lake and is helping with the mapping. Hawkins says the last comprehensive mapping of Iowa lakes took place in the 1970’s with hand drawn maps.

Hawkins says they found a lot of the 1970’s maps were no longer accurate as sedimentation and siltation and changes in water levels made the old maps obsolete. Hawkins says they’re using sonar to get a picture of the bottom of the lakes for the new maps. He says the other thing that has really helped is the global positioning system that gives a G.P.S. coordinate to each sounding that is taken.

The sonar shoots a sound pulse at the bottom of the lake, which bounces off the lake bottom and back to the boat where that data is collected in an onboard laptop computer. Hawkins says the sounder isn’t always perfect and does pick up some anomalies, which are first filtered out by a computer, and then they go through and look at the soundings and take out anything that looks like it doesn’t belong. The next step is to create a bottom surface, add contour lines, and they then fill in some other blanks to create the map.

Hawkins says they combine the contour map and surface map with aerial photography to add in park boundaries, public land boundaries, campgrounds, boat ramps and other things people might be interested in. soundings have been completed on 44 lakes and so far, 10 new maps available in black and white and in color on the D.N.R.’s website . You go to the site and then click on the fishing link and the "Where to Fish" link.

Hawkins says the new technology allows them to update the maps should any changes occur in a lake. Hawkins says they will be collecting data on about 30 lakes this year, including Red Haw Lake, Lake Ahquabi, Lake Belva Deer, Brushy Creek Lake, and Storm Lake and have maps available sometime during the winter 2009.