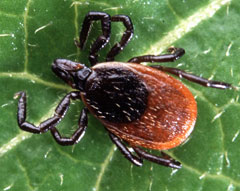 Just as Iowans begin to enjoy warmer weather, they’re being warned of a dangerous summer time pest. State public health officials are encouraging Iowans to protect themselves against ticks.

State veterinarian Ann Garvey says of the 80 ticks analyzed in the state this year, 19 were deer ticks, which spread Lyme disease.

The number of cases of Lyme disease has been steadily growing in Iowa over the past decade. Garvey says the rise in cases could simply be explained by increased awareness and surveillance, but there could also be a growing number of deer ticks in Iowa. Garvey says it’s difficult to tell the difference between a regular tick and a disease-carrying deer tick, but a "bullseye type rash" is a strong indicator.

"If you notice a tick on you and that bullseye rash, you definitely want to seek medical advice," Garvey said. In 2007, 119 cases of Lyme disease were reported in Iowa. In addition to the rash, Lyme disease symptons involve a fever, headache, fatigue and muscle or joint pain. If left untreated, swelling and joint pain can carry on for years.

Garvey says Iowans who spend any time outdoors should check themselves, plus their children and pets, for ticks. An embedded tick should be carefully removed from the skin with fine-tipped tweezers. "Grasp the tick by it’s mouth-parts where they enter the skin and then pull real evenly and steadily away from your skin," Garvey said. The area where the tick was located should then be cleansed with antiseptic.