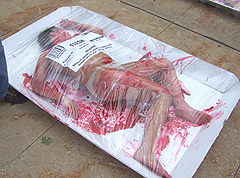 The People For the Ethical Treatment of Animals, or PETA, held their annual protest of the World Pork Expo in downtown Des Moines Thursday.

Two scantily clad women from PETA laid down in boxes and were covered with fake blood and then plastic wrap in a popular downtown plaza.

PETA spokesperson Ashley Byrne says the women were portraying packaged meat in a store to show that all animals are made of flesh — and to bring attention to the suffering of animals killed for food. "So we’re just bringing people this startling image to remind them that whether its from a pig, a chicken or a human being, flesh is flesh," Byrne says. "before pigs turn into hunks of meat under plastic at the grocery store, they have their testicles cut off, their teeth cut out without any pain killers. They suffer horribly at factory farms."

Byrne says they get a good response from people, even in Iowa, the nation’s largest hog producer. Byrne says people are compassionate and don’t like to see animals suffering, "so when they found out that not only do a thousand pigs per hour on average get killed in most slaughter houses, a million pigs every year are dying from transport related injuries and illnesses, they’re horrified." She says that makes a lot of people think twice about supporting an industry that "supports violence and death."

A crowd of several people gathered to watch and take pictures, including five men who were eating pork chops on a stick in a sort of a counter protest. Ty Baitzer of Des Moines was one of them. 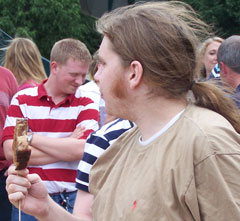 Baitzer says he’s a big fan of pork, saying it tastes really good. "I’m a carnivore, I like to eat good food, and vegetables they just don’t do it for me. I don’t know what these people are thinking, you know," Baitzer says. Baitzer pointed to his canine teeth and said they prove humans are meant to eat meat.

The World Pork Expo is currently underway at the Iowa State Fairgrounds.