You are here: Home / Fires/Accidents/Disasters / Thousands of vehicles being detoured with I-80 closed by flooding 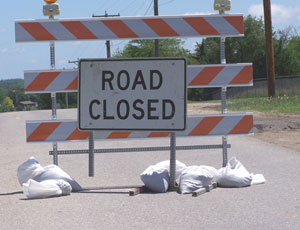 Cars, pickups, vans, S-U-Vs and semi-trucks are rolling across eastern Iowa’s highways by the thousands — many of them full of grumbling motorists. Interstate-80 is closed between Davenport and Iowa City due to flooding and the detour is taking them 110-miles out of their way. Dena Gray-Fisher, spokeswoman for the Iowa Department of Transportation, says the detour routes are seeing very heavy traffic.

Gray-Fisher says: "Of course, they’re very busy, as we expected they would be, especially for interstate travelers. These are persons that have really no options. They need to get across the state and we have them on the detour that starts at (Highway) 61 in the Quad Cities, going up to Dubuque on U-S 20 over to Interstate-35 and then down into Des Moines."

The closure of Interstate 80 was expected to take place around noon today and only be a small detour, but the roadway was closed about 8 P.M. Thursday and the detour route is now very large. "The flooding came much quicker than was predicted and the water level’s much higher. That affected other roadways on our original detour and we had to abandon that particular detour and set up this new one," Gray-Fisher says. "This is the only safe route that we have right now for people that need to detour through the area."

The area where the Cedar River is washing over all four lanes of I-80 in Cedar County usually gets about 33,000 vehicles every day and about a third of them are trucks. The stretch of I-80 will be closed for two or three days. Get updates by calling 5-1-1 or by visiting the D-O-T Traveler Information website .