You are here: Home / Fires/Accidents/Disasters / Corning on way to recovering from flood 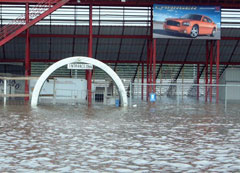 One of the first Iowa communities hit hard by flooding this spring was Corning in the southwest part of the state. Heavy rains during the first week of June sent the Nodaway River out of it’s banks, burying Johnny Carson Boulevard and much of the eastern side of town under water.

Corning Chamber of Commerce President Jessica Wilson says the waters have receded, but the recovery process is long from over.

“It took a good while for it to recede and businesses and houses to get back to normal…and I’m not sure they’re back to normal yet,” Wilson said. One sign that things are returning to normal in Corning is the reopening of the Adams County Speedway off Highway 148.

The racetrack, concession area and bleachers were under five feet of flood water 11 days ago – but officials still managed to clean it up and hold races this past weekend. Like most small Iowa towns, Corning only has a few restaurants. The Pizza Hut was buried up to it’s trademark roof and there’s speculation it may not reopen.

Wilson says, “I’ve heard both things – maybe they aren’t going to open and maybe they will reopen. In my opinion, they need to relocate being this is their third time having to re-do things (because of flooding).” All 14 Corning Community School District buses and several other school vehicles were flooded out, with damages estimated at $1.2 million.