You are here: Home / Fires/Accidents/Disasters / Expert says take care of damaged trees when you can 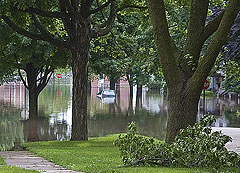 After several weeks of severe weather, including flooding, high winds and several tornadoes, Iowa homeowners need to assess the storm damage to their trees.

Once your house is squared away, extension educator Mike Maddox says repairing those trees should be a priority.

“People should take care of that right away, the broken branches can lead to decay and other structural problems in the tree if not tended to,” Maddox says. Homeowners can take care of small pruning themselves, but he says when they have to climb a ladder, they should call a professional.

He says professionals should also be called if power lines are involved or if there could be damage to property. He says people should tend to the trees as best as possible with the proper pruning cuts. As for flooding, the Iowa D.N.R. says most trees will survive the floods and continue growing for the rest of the season.

Flood-tolerant tree species may be able to handle 60 consecutive days of flooding without damage. Maddox says there are specific measures to take with wind damage to oaks and elms. He says use a pruning paint after doing the repair to keep out insects but that about the only time he recommends using the paint.

Maddox says homeowners with damaged trees on their property might save some money by doing the repairs themselves, but they could also end up with a big hospital bill. Small pruning can be done by hand from the ground or with a pole saw but if they have to get on a ladder or “do something in the tree where they have to be a monkey to get out to it,” Maddox says it’s then the pros need to be called in.

Waterlogged soil is another concern, as tree roots need oxygen, which they can’t get when saturated. Warm, dry weather is needed after the flood waters recede to prevent damage to the root system. To keep the trees healthy, the experts say to prune out all of the deadwood and when you replant, be certain to plant flood-tolerant trees in flood plains.