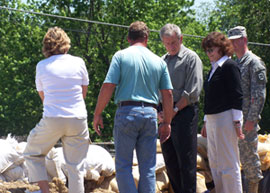 Governor Chet Culver, who is a Democrat, says he asked presidential candidates Barack Obama and John McCain to refrain from campaigning in Iowa during the flood fight.

Culver isn’t going so far as to say he’s angry, but is hinting that McCain’s visit to Columbus Junction yesterday was inappropriate.

"I’ve told both the Obama campaign and the McCain campaign that in my opinion, this is not the time to be campaigning for president especially during…a state of emergency and I, very fairly, told both campaigns that," Culver said. McCain, the Republican Party’s presumptive presidential nominee, flew into Muscatine midday Thursday and drove to Columbus Junction and met with local officials to discuss their flood experiences, then McCain spoke with reporters.

Culver’s aides say McCain’s staff was advised that now was perhaps not the best time to visit Iowa. Culver himself says this publicly. "We have 4,000 members of the National Guard deployed and we continue to fight raging flood waters. My recommendation was to suspend campaigning in the state of Iowa," Culver says. "We love politics and we know the candidates from both sides will be here a lot between now and November."

President Bush also visited Iowa yesterday, taking an aerial tour of Cedar Rapids and Iowa City then speaking with state and local officials who’ve been involved in the response to the flood. Culver says having a presidential candidate visit is "100 percent different" from having Bush here, as Culver says Bush’s visit was essential in the flood recovery.

"To give people some hope, to lift us all up and show that the White House is engaged in trying to provide as many resources today in terms of billions of dollars, potentially, to help us recover," Culver says. According to Culver, the authority to determine the full extent of federal flood aid rests with Bush. For example, when the federal government provides disaster aid it normally requires state and local governments to come up with 25 percent in matching funds.

However, in the aftermath of Hurricane Katrina and the September 11th attacks, Bush waived that requirement and had the federal government cover 100% of debris removal and other expenses associated with the disasters. Back on June 11, Obama was scheduled to hold a town hall meeting in Cedar Rapids but the event was canceled.

An Obama campaign statement said the decision was made "so no resources were diverted away from Iowans devastated by the floods." The mayor of Columbus Junction went on FOX News this afternoon to defend McCain’s visit to his city, saying it created no hardship.