You are here: Home / Education / Drake professor heading to Venezuela 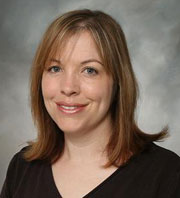 A Drake University sociology professor is brushing up on her Spanish and packing her bags for a ten-month stay in the South American nation of Venezuela.

Darcie Vandegrift will leave in August after being awarded a Fullbright Scholarship based on her academic and professional achievements.

Vandegrift says she’s thrilled and humbled at the opportunity to be a "cultural diplomat" in America’s flagship exchange program.

"I will be teaching one class a semester to sociology and political science students at the University of the Andes, and I will also be doing a research project, interviewing young adults about how they see their futures and their identities with the changes that have been created by globalization," she says.

As for the language barrier, Vandegrift says she’s fluent in speaking Spanish after having spent three years living in Latin America and a decade in the southwestern U.S. Her husband and two children are accompanying her to Venezuela for the ten months and she says they’ll face a bit more of a communications challenge.

Her husband, Victor, lived with her in Costa Rica for one year and understands Spanish, however, her kids, ages five and 11, don’t speak it. "But," she adds, "hopefully they will by the time they get back."

Venezuelan President Hugo Chavez has become notorious in recent years for his anti-American comments and actions. He’s also imposed rules on the university which Vandegrift says are unpopular there, so she thinks she’ll be warmly welcomed, but adds, she’s well aware she won’t be in the United States anymore.

"It will be important for my husband and I to be really careful about how we talk about Venezuelan politics and to be able to state our views if asked but also to be respectful and to be prepared for a lot of different kinds of viewpoints," she says.

The Fulbright Scholar Program was established in 1946 under legislation introduced by the late Senator J. William Fulbright to build mutual understanding between the people of the United States and the rest of the world. Vandegrift is among about 800 U.S. faculty and professionals who will travel abroad during the coming academic year.