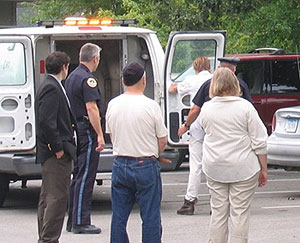 Four peace activists were arrested in Des Moines today as they tried to make a "citizens arrest" of Karl Rove, the long-time political advisor to President Bush. "It should be Karl Rove in that van. War Criminal!" one of the protesters shouted as the four were rounded up by cops. "Where’s there justice in this country?"

Rove was in Des Moines to speak at a private fundraiser for the Republican Party of Iowa. The protestors let the police know of their wish to make a "citizens arrest" of Rove, then police arrested the four as they stepped beyond the gate at the entrance to the private Wakonda Club where Rove was speaking.

Eighty-year-old Chet Guinn, a retired Methodist minister, was among those led away. "To be silent when major crimes are being committed against all humanity makes us accomplices," Gwinn told reporters just before his arrest.

About a dozen peace activists showed up for the protest. Daniella Bermeo of Ecuador stood at the side of a busy Des Moines street, holding a poster. "Karl Rove is a war criminal and war criminals cannot just be running around like that, like they haven’t done anything," Bermeo said. "I’m supporting the cause and supporting the people that he’s committed war crimes against."

Am Shahmeer of Des Moines, a former resident of Pakistan, said the small group hopes their message somehow gets through to Rove.  "There’s people out there who really care, who know what’s going on and they’re out there to stand up against any injustice that anyone is doing," Shahmeer said.

Reporters were not allowed in to hear Rove’s speech, nor were they allowed on the grounds to talk with the audience afterwards. Republicans paid $100 each for a ticket to the luncheon where they were able to listen to Rove speak. Those who paid $1000 were able to attend a separate reception and have their picture taken with Rove.

Two of the protestors arrested in Des Moines today were taken into police custody this past March when they disrupted Rove during his speech at the University of Iowa, but none were charged in that incident.