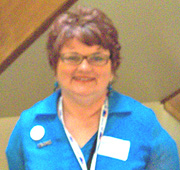 As Barack Obama prepares to formally accept the Democratic Party’s 2008 presidential nomination, some of the Iowans in Denver to watch the spectacle are reminded of the Obama campaign’s spartan beginning in Iowa.

Nancy Bobo of Des Moines was among the first to volunteer to work for Obama’s campaign. Back in February of 2007, a week before Obama officially entered the race, Bobo showed up at the Obama campaign office in Iowa. She met with the two Obama staff members.

"It was a tiny little office with a folding table, two folding chairs, two laptops," Bobo says. "When we met that day, it was just Paul and Emily and they were interrupted repeatedly with phone calls of the first staff arriving in Iowa."

Back then, some dismissed Obama’s campaign as folly, since Hillary Clinton was seen as a shoo-in. "She certainly was," Bobo says. "I remember when we were 45 points down last summer at one point and this hope we speak of didn’t look so apparent on the horizon and, you know, there were just so many people who worked so hard to get to this point."

Bobo’s relieved Obama has secured her party’s presidential nomination, but she’s looking ahead to the general election. "I’m here for the full ride, to the end of it," Bobo says. "We’re going to work as hard as we can to make sure this happens in November."

Kathleen Weber of Dubuque, another Obama campaign volunteer, is thrilled to have a ticket for Obama’s biggest speech yet. "I’ve been working on that campaign about four years, I think," Webber says. "You know, we first saw him after the ’04 convention in Galena, Illinois, and I’ve been on board from the get-go, so it’s been quite a haul."

Webber, a voting delegate at the convention, says Wednesday was a milestone, too. "I was so moved yesterday. It was very emotional for me when I signed my name on that ballot for Obama," Webber says.

Sixty-three-year-old George Dixon of DeWitt wept on the convention floor when he and the rest of the delegates formally voted to give Obama the nomination. Dixon says he never thought he’d live to see a black man like himself reach that milestone. "It’s one of the proudest moments of my life. It’s an historic moment and I’m just overwhelmed, totally overwhelmed," Dixon says.

Dixon and Iowa’s other 56 delegates to the convention set out for Mile High stadium at two o’clock mountain time, as the security lines were long and the crowd large for this evening’s event.