You are here: Home / Politics / Govt / Biden: Republicans have "profound" misunderstanding of economy 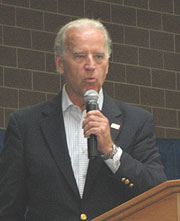 Democratic vice presidential nominee Joe Biden spoke to over a thousand Democrats gathered Monday afternoon in a building on the state fairgrounds, accusing Republicans of a "profound" misunderstanding of the U.S. economy.

Biden began with a promise that federal aid would be coming Iowa’s way to help this spring’s flood and storm victims.

Biden drew roars of approval from the crowd when he critiqued Republican rivals John McCain and Sarah Palin. "I find it absolutely fascinating that John McCain and the Republican Party are claiming the mantle of change now, literally," Biden said, to laughter and applause from the crowd. "…After eight years of abject failure…All of a sudden John and his Republican running mate are going to change the culture of Washington."

Biden offered a lengthy indictment of the Republican agenda. In particular, Biden singled out McCain’s health care proposals for ridicule. "John has this great idea. He’s going to give every American a $5000 tax credit which is going to encourage every employer to say, ‘Well, now I can drop health insurance,’ but the average cost of every plan is $12,000 and that’s what I call a bridge to nowhere, an absolute bridge to nowhere," Biden said, to applause from the crowd. "That is a bridge too far."

The "bridge to nowhere" reference is a jab at Sarah Palin. The Alaska governor and McCain running mate supported the controversial and now politically-infamous bridge to a remote part of her state before reversing course and telling the feds the state didn’t want the bridge built.

The rally with Biden was staged in a cavernous building that is home to a wide-ranging display of baby animals during the fair. The acoustics were a bit strange and at one point a woman in the audience apparently advised Biden to speak more clearly. "I know I’m in Iowa. You still instruct me. You are the most outrageous people I have ever met in my life. Only in Iowa would I come and be told how to speak and I love being back and being instructed. Thank you very much. It’s a good suggestion. Can you all hear me now? All right. Well, thank you very much," Biden asked, as the crowd laughed and applauded. "I want the press to note that. That would happen in no other state in America."