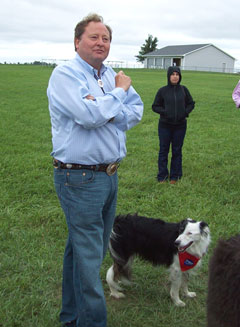 “Woodrow Wilson was in his first term when you did your first steak fry, wasn’t he?” the 53-year-old Schweitzer asked Harkin as the two Democrats flipped steaks on the grill.

Harkin, who is 68 years old, offered this retort: “No, Teddy Roosevelt.” Cameras captured the moment as Harkin and Schweitzer, accompanied by Schweitzer’s pet dog Jag, walked up to the grills. “We got some Montana steaks over here or is this all Iowa steaks?” Schweitzer asked.

Harkin gestured to the grill: “This is Iowa corn-fed beef.”  A bystander joked that the pair of politicians had better not be grilling moose for the crowd of Democrats who’d paid $30 each for a steak dinner.  As you may know, Republican vice presidential nominee Sarah Palin has expressed a liking for moose burgers. “There’s nothing wrong with moose,” Schweitzer said.  “All right.  All right,” Harkin said, and Schweitzer added, “Don’t be picking’ on the moose.”

When given the opportunity during a question and answer session with reporters, Schweitzer didn’t pick on Palin either. “I actually know her as a governor.  She’s from a neighboring state up there in Alaska — about as close as you can get, Montana and Alaska.  She’s going to bring some of the western issues to this race,” Schweitzer said.  “And by the way, she’s not the only one who’s been around moose.  I have, too.”

According to Schweitzer, there’s no need for Democrats to panic about recent polls which show Democrat Barack Obama now trailing Republican John McCain. “You’re a long ways from the end of this race.  There hasn’t even been a debate yet…I got to be honest with you.  The people that are focused on this race are the mostly people who are writing newspapers and doing television,” Schweitzer told reporters.

“The regular folks out there who are raising families and working on farms and driving truck, they’ve got a lot of things that are important in their life, and politics comes about third or fourth. They’ll focus on this race on about the first of October.”

A Des Moines Register Iowa Poll released Sunday indicates Obama is leading McCain in Iowa by 12 points.  Harkin says he “senses” as he travels Iowa that Obama is doing “very well” here. “But you know polls are a snapshot,” Harkin counsels.  “They are no substitute for being right on the issues, working hard, being energized, getting your vote out and we’re going to do that here in Iowa.”