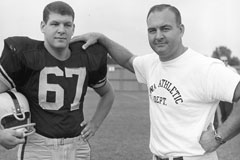 Former University of Iowa and NFL football standout Wally Hilgenberg has died at his home in Prior Lake, Minnesota.

Hilgenberg, a native of Marshalltown, was 66-years-old and had been in declining health since being diagnosed with ALS (Lou Gehrig’s disease) in 2006.

Hilgenberg lettered from 1961 to 1963 for the Hawkeyes. He played both sides of the ball as an offensive guard and a linebacker. He was named co-captain of the 1963 Iowa team and was a third-team all-America selection. As a guard, he was named to the United Press International (UPI) first all-Big Ten team and to the Associated Press (AP) third team.

He was picked in the fourth round of the 1964 NFL draft by the Detroit Lions. He was traded to the Pittsburgh Steelers following the 1967 season. He ultimately wound up with the Minnesota Vikings where he played 12 years and was part of four Viking Super Bowl teams.

Hilgenberg’s brother, Jerry was an all-American center and is part of Iowa’s Varsity Club Hall of Fame.