You are here: Home / Crime / Courts / Charges upgraded against man in fatal accident 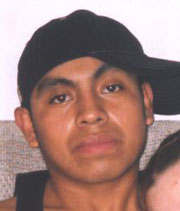 Des Moines police have upgraded charges against a wanted man in the investigation of a fatal accident.

Police are looking for Tomas Diaz-Diaz, who also goes by the aliases of Feliciano Diaz and Nestor Mendez. He is wanted in connection with the September 26th death of Dennis Kaiser of Des Moines.

Kaiser was riding a horse, near a park on the city’s southeast side, when he was struck and killed by a vehicle that left the scene. It happened just before 9 p.m. Diaz was initially called a Material Witness in the case, but police are now indentifying him as the person who was driving the vehicle that struck and killed Kaiser.

He’s wanted on charges of "Material Witness to Vehicular Homicide" and "Failure to Render Aid during a Fatality Accident." Diaz has lived in Urbandale and worked at the Flying J Truck Stop in Clive. A reward of up to one-thousand dollars is available for information leading to his arrest.