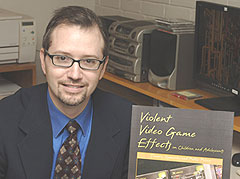 A researcher at Iowa State University has found that babies, as young as five months old, can distinguish the difference between happy and sad songs. ISU Assistant Professor of Psychology Douglas Gentile monitored the reactions of nearly 100 babies with researchers from Minnesota and Utah.

The babies heard a variety of tunes, from upbeat numbers like "Ode to Joy" to gloomy songs like Beethoven’s "Symphony Number Seven". Gentile says they found out what many parents suspect – babies can make sense of the world long before they can talk. In addition, the research provides more evidence of the emotional power of music.

"When you’re choosing a CD to put on, we almost always do it based on an emotional choice. We pick music that either matches our current mood or is going to change our mood in some direction," Gentile said. "This study shows that even babies pick up on this ‘mood effect’ of music." As children get older, many parents grow concerned with the lyrics their kids are hearing in music.

Gentile has studied that issue and believes parents should be more concerned with the mood of the music. "I do get more concerned if your kid is spending four hours a day listening to really angry sounding music, because that’s not likely to help their mood a whole lot and it suggests there’s something they’re feeling angry about (and) they want to explore that feeling – you might want to know what that is," Gentile said.

Gentile’s research will be published in the upcoming issue of the academic journal Infant Behavior and Development.