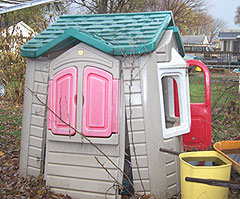 A Grimes man, suspected of robbing three Des Moines area banks, is in jail after being captured in an unusual way this morning.

Des Moines Police Sergeant Vince Valdez says officers were called to a home on the city’s northeast side at 8 a.m.

The owner of the home found an acquaintance had broken in through a window overnight and was sleeping on his couch. He recognized the man, 57-year-old Stephen Gardner, from bank surveillance photos and called police.

"When patrol officers got there, they were looking for Stephen Gardner and found him in the backyard hiding in a child’s playhouse," Valdez said.

Earlier this week, police found a car Gardner was believed to be driving. He is now charged with three counts of second-degree burglary for robberies at two credit unions and a bank. "We initially put out a warrant for (Gardner) as a material witness in those robberies, but once the detectives talked to him, it was very clear to them that he was our robber," Valdez said.

No one was injured in this morning’s arrest. Valdez admits using a playhouse a criminal hideout is a bit strange. "We’ve got people who’ve tried to hide from us in many different places, whether it be under a sink, in a bathroom vanity or an attic…they’ll find places to hide, but we usually find them," Valdez said. "A lot of times (officers) will bring a K-9 along and that usually flushes ’em right out."

The man who called police, George Vahey, said he met Gardner several months ago. Vahey refused to talk about this morning’s incident or his relationship with Gardner with Radio Iowa.