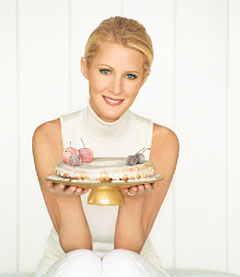 One of the Food Network’s most visible celebrity chefs is in central Iowa this weekend to share some of her Midwestern recipes, countertop techniques and kitchen common sense.

Sandra Lee, the host of “Semi-Homemade,” says her cooking philosophy that created the popular program is based on a 70-30 ratio — of 70% store-bought food items and 30% fresh.

Lee says that’s exactly how your grocery store is laid out. “Seventy percent is in aisles. It’s canned, jarred, boxed, pouched and packaged,” she says.

“The perimeter, your bakery, your meats, your dairy and your produce, is the 30% fresh ingredients.” In an interview with Radio Iowa, the blonde Wisconsin native says it’s a simple formula but it’s one regular folks who didn’t spend years at culinary school can follow to create tasty, nutritious meals.

“Combining those two is how we shop and how we fill our pantries and fridges anyway. My job is to show you 2001 ways to do it new with what you already love.” Lee has been a featured chef on the Food Network for five years and has build a small empire with a dedicated following. She has 16 cook books in print and has just released a 17th book, her bio, called “Made From Scratch.”

It’s billed as the true story of how Lee went from being raised on food stamps to starring in her own TV show. She says her style of cooking is on the nation’s front-burner because the more complicated Julia Child-era recipes often don’t end up looking like they’re supposed to and may not taste so hot, either.

Lee says: “I think what Semi-Homemade’s strength is, is we call out the name brands so that you know exactly what I used, that way the picture you see on the page of my books is exactly what you’re going to wind up with no matter what your talent is, if you’re a beginner cook or a gourmet.”

Lee is also launching a magazine in 2009 that will focus on cooking and many of her other interests, including interior design, crafts, scrap-booking, flower arranging and gardening. Lee is among the featured chefs at the Celebrity Food and Wine Expo , underway at the Iowa Events Center in Des Moines through Sunday.
AUDIO: Matt Kelley interview with Sandra Lee. 4:15 MP3