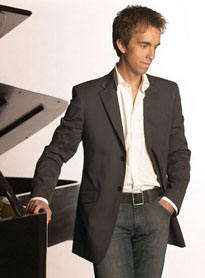 An eastern Iowa native opens his seventh holiday piano tour of the region this holiday weekend. Jim McDonough is playing eight shows in five Iowa cities this year, with elaborate sets and costumes, a full 15-piece orchestra and a troupe of ten singers and dancers.

"We have some moments that are like my CDs that are intimate, solo piano moments, just me at the piano with the audience basically, and then we contrast that with the high-energy production numbers with the whole cast and orchestra," McDonough says.

McDonough’s tenth CD was just released, called "A Christmas to Remember." He says, "There’s a collection of Christmas songs that everyone wants to hear and there are some I hadn’t recorded yet. It seems like many of them had something to do with memories or evoked a very fond, warm Christmas memory, so that’s where the title came from."

As he’s done the past several years, McDonough says the holiday tour benefits Camp Courageous, a year-round recreational facility in Jones County for people with disabilities. "I grew up in Monticello and the camp is located just outside Monticello. Over the years, I had the wonderful opportunity to see first-hand the work that they do. I couldn’t be more thrilled to have this entire tour benefiting Camp Courageous."

McDonough is playing first in his hometown of Monticello on Saturday, then over the next few weeks in Des Moines, Cedar Rapids, Dubuque and Cedar Falls. His CDs are for sale in more than 800 stores nationwide. For more information, see McDonough’s website .