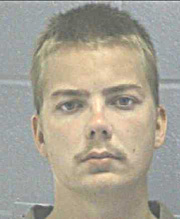 A murder suspect from the Deep South was arrested last night in southeast Iowa. Authorities say tips from several Iowans led them to a Knoxville hotel where they arrested 22-year-old Jesse Scheuing of Georgia without incident.

Schueing’s wanted for killing a convenience store clerk in Alabama during a November robbery. Jessica Lown, spokeswoman for the Iowa Department of Public Safety, credits the many tips from the public in helping track the suspect down.

“Some of those were dead ends, but some of them were leads and we followed those leads to Pella and around the Newton area and finally to Knoxville, which is where we apprehended Mr. Scheuing.”

Lown says the first clue the murder suspect was in Iowa came when a Highway Patrolman spotted an SUV with Alabama plates along Interstate 80 in Jasper County near Newton on Thursday morning. Lown says a state trooper who lives near Newton was checking on cars that were still in ditches from the previous day’s snowstorm and noticed the SUV seemed out of place and quickly learned it was suspected as having been stolen by the murder suspect.

The SUV’s fuel gauge was on empty, so Lown says it appears Scheuing drove it until he ran out of gas. From there, she says, it’s unclear how the suspect made it to the Knoxville hotel. “He may’ve hitched a ride, it’s possible that any number of things could have happened,” Lown says. “We do know that he did get from Newton down to Knoxville and we’re trying to put together that story right now.”

The suspect was taken into custody about 6:45 P.M. at the Red Carpet Inn in Knoxville. He’s being held in the Marion County Jail pending extradition to Alabama.