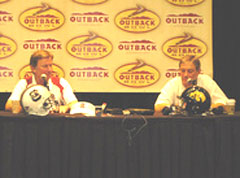 There are just three more days of preparation for the Iowa Hawkeyes as they get ready to take on South Carolina in the  Outback Bowl  on New Years Day in Tampa.

Coach Kirk Ferentz says workouts have gone well, but everyone is glad top been in game week. He says the toughest part of the preparation is the front end because the game is so far away.

At a joint news conference on Sunday South Carolina coach Steve Spurrier said the Hawkeyes remind him of Alabama. Ferentz says a comparison to the Crimson Tide would be limited to style of play.

Ferentz says," We’re certainly not as good as Alabama, but maybe a little bit like them, which is nice, except they didn’t play Alabama, so we don’t know how they would defend them."

The Hawkeyes finished the regular season 8-4.

(photo courtesty of the Outback Bowl)