You are here: Home / Agriculture / Northey "keeping the door open" to run for Governor 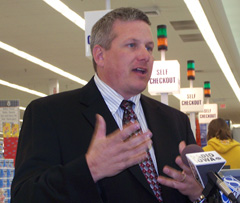 Northey was one of only two Republicans who won in statewide races in 2006, and Northey says he’ll decide by this summer whether to run for governor in 2010.

“Right now I’m very happy being secretary of ag. I see myself very possibly running for reelection again as secretary of ag,” Northey says. “I haven’t decided yet on running for governor. I think there’s plenty of time to make that decision.”

Northey says certain criteria must be met if he launches a bid for governor. “It does depend where the state’s at. It depends who else is running. It depends on the dynamics of politics in this state,” Northey says. “Frankly, it is important to win..if you’re going to do a race like that.”

Democratic Governor Chet Culver is raising money and planning his reelection campaign. It’s been more than 46 years since an incumbent Iowa governor has lost a bid for reelection. “That has to be part of the analysis for anybody thinking about running for governor,” Northey says. “But I do think we’re going through very challenging times and to provide an alternative to some of the spending that we’ve seen, maybe some of the additional spending that’s out there, the economic times that we’re going through right now and the management that the governor has may be a ticket to provide an alternative.”

Northey made his comments this morning during taping of the IPTV program “Iowa Press” which airs tonight at 7:30. After the show’s taping, a reporter asked Northey why he would want to be governor. “I do think governor of this state is an important job, sets a tone for where we’re going. It has some real leadership opportunities and I’m concerned about some of the directions, certainly some of the spending that we’ve had, some of the priorities that there’ve been so I think there (are) a lot of reasons to look at doing that. The real challenge is one — can you get elected? Do people even want you? Can you get support? Who else is out there (running for governor)?” Northey said. “…Those are all pieces that go into a decision.”

The last time an incumbent Iowa governor lost his reelection bid was in 1962, when Republican Norman Erbe lost to Democratic challenger Harold Hughes.