You are here: Home / Military / Latham returns from trip to Iraq &amp; Afghanistan 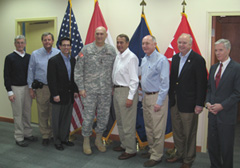 Congressman Tom Latham, a Republican from Ames, has just returned from a trip to Afghanistan and Iraq.

"In Iraq, things have made a dramatic change in a positive way from my previous three trips," Latham says, "and I can see absolute, tremendous progress throughout the country."

Latham was one of six Republicans from the U.S. House to travel to Iraq, with stops in Baghdad and a key U.S. military base north of Baghdad. "Because of the great work of our men and women in uniform they’ve made tremendous progress and I’m very hopeful that we’ll be able to bring a lot of our troops home quite quickly because of the progress that has been made," Latham says.

"But still, it’s fragile. Things could happen yet, but it’s unbelievable the governance that has come in and the support at the local level."

Latham says Afghanistan is an entirely different story, unfortunately. "It’s still a very difficult place, a very poor country — probably third or fourth poorest country in the world. There has been no history of any kind of central governance there," Latham says.

"It’s still controlled, basically, by tribal leaders throughout the country and certainly with the poppy/opium trade, it makes it very, very difficult."

President Obama has made it clear he wants to turn the focus on Afghanistan, and Latham agrees it will take more U.S. troops to "clean out" the bases for terrorist activity that are along the eastern border of Afghanistan.

"We do make the world more secure by getting rid of these people," Latham says. "Having said that…it’s going to take more troops and there are more troops on the way this year. We’ll see, then, the results, but it is certainly in our national interest to make sure the terrorists are taken out of that safe haven."

Hear more about Latham’s trip by clicking on the audio link below.