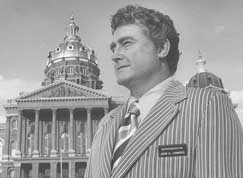 The Iowa House this morning offered a poignant farewell to an Irishman who served as a state representative for 32 years.

"We just lost a great friend…and a great Irishman this past week. John was a dedicated servant…He was a statesman, so today we’re kind of dedicating St. Patrick’s Day to John Connors," Mertz said. "Amanda Hynek, (Representative) Todd Taylor’s clerk, will play and sing ‘Danny Boy’ but will reference ‘Oh, Johnny Boy’ for all of us."

Hynek sang the song’s closing phrase "and I shall sleep in peace until you come to me" acapella, then wound the song down with a few more chords on the guitar. The members of the House then stood and applauded.

On St. Patrick’s Days of the past, Connors would lead a parade down the center aisle of the House, waving an Irish flag at the front of the procession of legislators who claim Irish ancestry. For the first 17 years Representative Mertz was in the legislature she danced the jig in the House on St. Patrick’s Day, with Connors at her side, leading the clapping. "And I won’t be doing the Irish jig this year. I wanted to but my doctor said, ‘No, wait ’til next year,’" Mertz said. "So I’ll have to hold off ’til next year."

Mertz is 80 years old and marking her 21st year in the Iowa House. "Holding the distinction of being the oldest legislator, I now name all of you honorary Irishmen for the day," Mertz said this morning at the statehouse, before telling her colleagues she hopes they enjoy the luck of the Irish today.

Click on the audio link below to listen to what Mertz said and Hynek sang this morning.