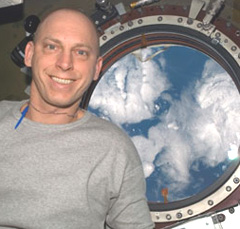 The first and only Iowa State University graduate who’s been in orbit is going to make a return trip.

NASA astronaut Clay Anderson has been named to the crew of the space shuttle Discovery for a mission to the International Space Station early next year.

Anderson says they plan to launch around March 18th of 2010.

“We’re going to have a cargo element inside the payload bay of the shuttle that contains science experiments and racks and supplies and clothing and all good stuff for the station crew,” Anderson says. “We’re going to transfer all that over and we’re going to bring home some stuff they don’t need anymore. I’m going to go outside (the space station) and do three spacewalks, two of which are required to change out an ammonia tank assembly.”

In his first space assignment, Anderson spent between June and November of 2007 living aboard the orbiting space station. There are many risks in spaceflight, the worst of which were realized most recently in 2003 with the break-up of the shuttle Columbia which killed all seven astronauts aboard. Anderson says he’s often asked one question.

“Are you afraid? Are you scared? You get to that point where you’re so well-trained that you don’t think about anything about going wrong. And, then if something does go wrong, you try to handle it in real time,” Anderson says. “Of course, the Columbia astronauts, they tried but they didn’t have the capability to do anything about their predicament, so that’s the tough piece of it and that’s one of the things we tend not to think about.”

Anderson says he’s thrilled to be assigned to another mission to the space station. He and his wife have two kids and the 50-year-old Anderson says he visits schools across the country whenever his training schedule allows. Anderson caught the space bug around age eight and says he hopes he can inspire young people to get involved in the program.

“I try to instill in them that they can certainly do it if they want to and what they maybe don’t realize yet is there’s so much cool stuff that’s going to happen in the next 10 to 25 years,” Anderson says. “You think of Star Trek and all those kind of things, I think we are on the verge heading in that direction.”

Anderson earned his master of science degree in Aerospace Engineering at Iowa State University in 1983. He’ll be back in the region this week. Anderson is a native of Ashland, Nebraska, and the Strategic Air and Space Museum near Omaha is hosting the debut of a movie about Anderson.

“I haven’t even seen a piece of the finished product so I’m a little nervous but I think it’s going to be a lot of fun and I’m very excited and very honored they would do this about me,” Anderson says. “My whole family gets to be there, so it’s going to be a great time.” The movie, “Homemade Astronaut: The Clayton Anderson Story,” will debut at the museum on Saturday.