You are here: Home / Fires/Accidents/Disasters / State says there are 2 potential cases of Swine Flu 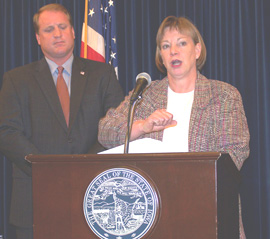 State officials say there are two potential cases of the “swine flu” virus or what’s also called the H-1-N-1 virus, that have been identified so far out of over 150 samples sent into the state Hygienic Lab for testing.

Iowa Department of Public Health director, Tom Newton, says they will find out sometime Thursday from the C.D.C. if they are actually infected with the virus.

He says the first is an adult man from California who was traveling through Scott and Clinton counties late last week. The second case is a south-east Iowa female who returned from Mexico and got ill. She had traveled through Johnson, Des Moines and Muscatine counties. Newton says the two have potentially spread the disease through the counties they visited.

Newton says both were out and about doing normal day-to-day activities and going to work while they were still infectious. He says now that the virus has been introduced to the state, they anticipate that it will spread across Iowa. While one U.S. death has been confirmed from the virus — state epidemiologist Patricia Quinlisk says the two potential Iowa cases are now beyond major health concern.

Quinlisk says neither one of them were hospitalized, and one became quite ill, but recovered quickly. She says both people will soon be able to go back to their normal activities.

Governor Chet Culver says the potential cases set in motion action to be prepared for an outbreak. “I want to be clear, now is the time to continue our diligence and to exercise caution. There is no need for alarm,” Culver says. The governor says he has asked director Newton to prepare a declaration for a public health disaster if the two cases are confirmed.

Quinlisk says the potential cases should serve as a reminder for Iowans to be aware that this influenza is spread the same way as the seasonal flu — through contact with those that have the virus. “You do not get it from eating pork or being around pigs,” Quinlisk says. She says you can also get the virus from touching a surface that has been sneezed on by someone who has been infected. Quinlisk says now is the time to be aware of your health and not take chances.

Quinlisk says, “If you feel ill, stay home. Do not go to work, do not go to school. This means if you don’t feel well by you do feel could push yourself anyway and go to work or school, do not do it. Stay home. it would be better if you work from home or have your children work with schoolwork at home, than to go to work and school and spread this disease to others.”

State officials say they have some 400,000 doses of the antiviral medication and a public health disaster declaration would clear the state to receive up to 750,000 doses. Quinlisk says the antivirals help lessen the severity of the disease, but they are not used to prevent the disease.