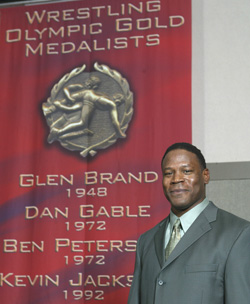 Jackson was part of Iowa State’s last national championship team in 1987 and from 2001 through 2008 was the national freestyle coach for USA Wrestling.

Jackson says he felt good about his chances of landing the job after interviewing this week. He says it was more like a conversation than and interview and they understood he wanted to be at Iowa State.

Jackson says his job is to bring back a national championship. He says he would not have taken the job if he did not think he could get it done. Jackson referenced the rivalry with Iowa, "I’m not going say anything to get those guys heated, it doesn’t take too much to get them heated over there, so I’m not gonna say too much to get them heated right off the bat, but it’s going to be a heated competition."

Jackson says Sanderson left the cupboard full and he will have an experienced squad for his first season. He says you will truly see a team that is going to compete at a much higher level and a change in the tactics and scoring ability and the things they do to win matches.

Jackson won a gold medal at the 1992 Summer Olympics.