You are here: Home / Education / Pulitzer Prize winner urges Grinnell grads to be the "Re-Generation" 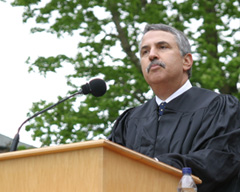 A best-selling author who’s won the Pulitzer Prize three times told the Grinnell College Class of 2009 they are the "Re-Generation."

Thomas Friedman addressed the graduates at this morning’s outdoor commencement.

"Yes, we need to go from the ‘Greatest Generation’ to the ‘Grasshopper Generation’ to the ‘Re-Generation,’" Friedman said. "That is your job, with our help of course, to regenerate, renew and refresh America. And you may not believe it, but the liberal arts education you received here has prepared you for this task in more ways than you might think."

Friedman followed his best-seller, "The World Is Flat," with another best-selling title: "Hot, Flat and Crowded." According to Friedman, imagination is the most important skill in this century.

"So if you are leaving this school with your imagination enriched and sharpened, you are leaving here with a lot more job-relevant skills than you may think. In fact, you’re leaving here with the most important skill you can have," Friedman said. "Because when the world if this flat — and it is, when there are this many distributed tools of innovation and connectivity, what you imagine is going to matter so much more because you can now act on your imagination as an individual so much farther, faster, deeper and cheaper than ever before."

Friedman told the graduates their first task is to "restore…basic values of hard work and accountability," as Friedman argued those are the values which made America great.

"So whatever ethics you learned in Philosophy 101; whatever uncompromising idealism was spawned in you by a professor you so admired; whatever unbending convictions about what is right and wrong, black and white; what you stuck to in student government debates even though your cause seemed lost; whatever principled behavior you demanded from the administration here or from fellow students supporting the same cause –whatever you do, do not leave it here," Friedman said.

According to Friedman, some company somewhere will pay for those values. But if they won’t, Friedman urged the students to strike out on their own.

"We have to invent and innovate our way out of this crisis," he said. "We have to get away from just financial engineering, designing more and more exotic ways to make money for money and get back to real engineering of stuff — stuff and services that people need to make their lives more productive, more healthy, more environmentally-sound and more enjoyable."

Friedman, who is a New York Times columnist, received an honorary doctor of humane letters degree from Grinnell College.