You are here: Home / Business / Iowa store owner to testify before Congress on health care reform 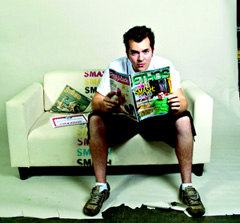 The owner of a Des Moines clothing store, known for its t-shirts with irreverent and anti-establishment slogans, is scheduled to testify before a congressional committee today about health care reform.

Twenty-six-year-old Mike Draper says he’s seen the health care picture from all perspectives — having been uninsured, underinsured, covered under his wife’s plan, and now as an Iowa small business owner.

He also lived overseas for a year under the United Kingdom’s national health plan. Draper says he’s anxious for his voice to be heard on the topic in Washington D.C. Draper says, “The system we have now is just so absurdly designed that I can’t imagine that a group of intelligent people could come up with anything actually worse.”

The invitation to speak before the House Ways and Means Committee came after Draper, who runs the store called Smash, recently wrote a letter to the editor of the Des Moines Register about our nation’s ailing health care system. Copies of the letter got around, even to the U.S. Capitol.

“Anybody who knows me from Smash and knows the type of humor, knows that I never really tone it down,” Draper says. “I’ll take out obscenities and stuff but I usually just say what I want in the way I like to say it which is sarcastically or with biting humor.”

He opened the t-shirt business by himself in Des Moines’ East Village a few years ago and has built a wide customer base through the Internet, now with a staff of 12 and anticipated gross sales this year in excess of a million dollars.

Draper is among three Iowans who’ve been flown to Washington this week by the Iowa Citizen Action Network to address members of Congress and others. “I think it’ll at least be an interesting perspective,” Draper says. “You hear a lot of times that congress people will say, ‘Well, small businesses don’t want this because…’ and I think it’ll just be helpful to step in and say, ‘I’m an actual small business and this is what I would want.'”

He’s been known to sport a mohawk-style haircut and wears t-shirts daily, so testifying before a U.S. House committee presented something of a wardrobe emergency for Draper.

“I do a lot of public speaking for Smash to various groups, whether it’s 200 fifteen-year-olds or a college business class, so speaking in front of Congress I don’t find very intimidating, but trying to pick out clothes to wear was a nightmare,” Draper says, laughing.

“I haven’t actually bought a shirt with buttons for the last six years. It’s like I’ve been dropped into a whole new world, trying to figure out what’s fashionable and what isn’t fashionable.”

The other Iowans in Draper’s group are: ReShonda Young of Waterloo, the operations manager of a family business, Alpha Express, and Chris Petersen, an independent farmer from Clear Lake.

Young testified Tuesday before the House Labor and Education Committee hearing, while Petersen is to provide testimony at a small business town hall meeting on Capitol Hill tomorrow.