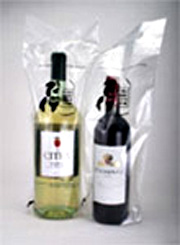 Supporters believe a new state law that goes into effect Wednesday, July 1 will make it easier for Iowans to cart a partially-filled bottle of wine home from a restaurant.

"They cost somewhere between 30 and 40 cents per bag," Olive says. "They then reseal it and if you are then stopped, the police officer would be able to tell if your open container is sealed in this doggy bag."

According to Olive, few restaurants re-cork bottles of wine for customers because police couldn’t tell who put the cork in the bottle and drivers were charged with having an open container of alcohol in their vehicle.

"You can never tell if they’ve popped open the cork when they left and started to drink back out of the bottle of wine," Olive says.

Olive argues this new law may reduce drunken driving as restaurant-goers may be less inclined to drain a bottle of wine if they can safely tote home a half or quarter bottle in a doggy bag.

"If we can keep people from drinking too much alcohol and then driving — I think that’s a very good thing for us to do," Olive says.

Some restaurant owners hope the new law will prompt customers to buy a pricier bottle of wine if they know they can drink a glass or two at the restaurant, then take the rest home in a "doggy bag."

According to www.winedoggybag.com , 24 states and the District of Columbia now allow drivers to cart "doggy bags" of wine in their vehicles. The surrounding states of Nebraska, Missouri, Illinois and Kansas are "doggy bag" states when it comes to wine.