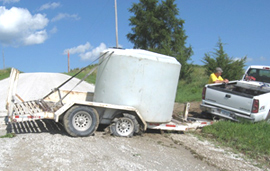 Pottawattamie County Sheriff’s Department spokesman Sgt. Dwayne Ritchie says 36-year-old’s Michael Wheeler, of Omaha, and Shane Benedict, of Neola, were taken into custody at around 4:15 P.M. Saturday, after a trailer pulled behind the pickup they were driving blew a tire, sending the pickup and trailer into a ditch.

The trailer was hauling a 1,500 gallon tank filled with water allegedly stolen from a fire hydrant at 1st Avenue and North Street, in Underwood. Sergeant Ritchie says a witness saw the men with a large hose attached to the hydrant, filling the tank. Realizing the men were taking the water, one of the witnesses took a photo of the crime in progress before reporting it to the sheriff’s office.

An unidentified teenager was also involved in the incident, but no charges were filed against that person. Wheeler and Benedict each face charges of Theft in the 5th Degree, Interference with Officials Acts and Public Intoxication. Both men were being held over the weekend in the Pottawattamie County jail.

Ritchie says the men told authorities they had hoped to use the water for a "Slip-N-Slide."