You are here: Home / Education / Culver stops short of calling for lawmaker’s resignation 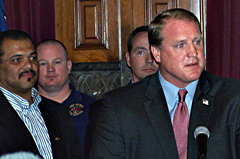 Governor Chet Culver isn’t calling for a state legislator’s resignation, but the governor says he expects fellow Democrat Kerry Burt of Waterloo to be facing not one but two criminal cases soon.

Burt was elected to his first term in the Iowa House this past November.  In February, Burt was arrested Ankeny and charged with drunken driving. Recently-released video of Burt’s arrest shows Burt claimed to have been drinking with the governor that evening. During a brief question-and-answer session this morning with statehouse reporters, Governor Culver was asked about Burt’s claim.

"I was with Mr. Burt for all of about 30 minutes at a dinner with about 15 people. I have no idea what he did after I left that dinner at 8:55," Culver said. "I was home at nine o’clock. He was arrested at 2 a.m. and I have no idea, really, what he did between nine and two."

Culver insisted he’s not peeved Burt tried to "name drop" to try to get out of the drunken driving arrest.

"In this job you get used to kind of rolling with the punches," Culver said. "And (Burt) had a (0.13) blood alcohol level and he said a lot of things, I’m sure, that he regrets at this point."

Burt at one point is heard on the video tape claiming legislators cannot be arrested and, at another, he asks the policeman to be let go as a "professional courtesy" to a fire fighter. Culver isn’t calling for Burt’s resignation, however.

"That’s really a decision Mr. Burt needs to make along with his family and his constituents and perhaps his lawyers," Culver said. "But we have two criminal proceedings moving forward and the outcome of those proceedings might impact his decision, I would imagine."

A state audit concluded Burt used a relative’s address to enroll his children in the Price Lab School at the University of Northern Iowa, thereby saving over $35,000 in tuition. Culver denies having "inside information" about a pending indictment in that case, but nonetheless Culver hints Burt’s August trial on the drunken driving charges may not be Burt’s only trial.

"I expect there will be information forthcoming with more details," Culver said.

Culver himself provided a few details about his own drinking on the evening Burt claims to have been out on the town, drinking with the governor. Culver notes that he did attend the same Iowa Pharmacy Association legislative reception as Burt, followed by dinner in Des Moines with Burt and about a dozen other legislators.

"There was some alcohol that was served at the pharmacy reception," Culver said. "I had a glass of wine and had a quick dinner and went home."

The arrest report released this week by Ankeny police indicates the policeman who pulled Burt over heard metal grinding on the pavement and saw one of the tires on Burt’s vehicle was shredded. Burt told the cop he had hit a concrete barrier along Interstate 35.

"Obviously this is a very serious legal matter and I think very troubling to see how dangerous this situation really was," Culver said. "But because it’s a pending legal matter I’m not going to comment further."

Listen to all of Culver’s comments by clicking on the audio link below.