You are here: Home / Human Interest / Another “Honor Flight” scheduled for veterans 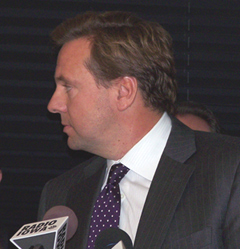 Another group of Iowa World War Two veterans will get to fly to Washington, D-C to view the monuments put up in their honor. The Hy-Vee supermarket chain announced today it is donating $250,000 for the flight November 4th. Casey’s Convenience stores is paying for a flight that will leave October 13th. Jeff Ballenger coordinates the trips that are called “Honor Flights.”

Ballenger says there have been a lot of conversations about what is wrong with the nation’s corporations, and he says the donations for these honor flights shows what’s right with two of our home-grown corporations. Hy-Vee is headquartered in West Des Moines, and Casey’s has its headquarters in Ankeny. The flights take veterans to see the monuments for free.

The first flight flew from western Iowa, and the next from central Iowa. Ballenger says each flight is different, with different stories. He talked about the recent flight and a Marine veteran who had been pushed around all day in a wheel chair until they visited the Marine Corps monument.

Ballenger says the veteran walked from the bus to the monument, and they asked him why he didn’t’ wait for the wheelchair. He told them” “You’re not gonna push me to my memorial.” Ballenger says that’s an example of where the money goes to fund the flights. He says it’s important to keep the flights going.

“We’re losing as you may or may not know, 1,200 World War Two veterans a day, and so the push is on,” Ballenger says. He says the fourth flight that Casey’s is sponsoring had a veteran who was ready to go, but his wife called and said he had died. Casey’s has been raising money in September by having customers donate one dollar for a pennant. Company officials say they’ve raised $115,000 so far and that promotion continues through his month. Ballenger says they plan to launch another program soon that will allow kids to thank veterans.

Ballenger says they will ask school kids across the state to write letters thanking veterans and that will give the veterans something to read on the flight back from seeing the monuments. Ballenger says they have had some 700 applications of veterans wanting to go on the flights, and the next two in October and November should take care of most of those. He is not exactly sure how many more veterans there are that might want to take an Honor Flight. Ballenger says things can change one day to the next if a veteran dies before his flight leaves.

Ballenger says the situation is very fluid and he says the applications come into Ohio and Iowa and some are duplicates, so they can’t get an exact number of veterans who are waiting. For more information on the honor flights, go to: www.centraliowahonorflight.org.