A group of 10 workers at a Des Moines tire plant collected a one-million dollar Powerball prize today at Iowa Lottery headquarters in Des Moines. The workers at the Des Moines Firestone plant have been playing together for several years, and spokesman Dan Kelley of Urbandale says he learned late Saturday night they had matched all five numbers but not the Powerball.

Kelley says a few of the guys always say it only takes one ticket to be a winner. He says their $100 investment in Wednesday’s drawing only produced 12 dollars in winnings, so they took 10-dollars and rolled it into the next drawing and won. The group was able to win the one-million dollars because they’d purchased the Powerplay option.

Kelley says they play the Powerplay because his wife matched five numbers back in 2005 and only won $100,000 instead of $500,000, because she hadn’t bought the Powerplay. He says they all talked about it and decided it would be worth an extra dollar to buy the Powerplay. The group calls themselves “The Local 310 Ten” because they’re all members of Local 310 of the United Steelworkers Union. Kelley always buys the tickets, and says he keeps a ledger to be sure everyone gets paid off. 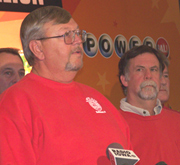 He says he keeps a little notebook with everyone’s names on it and a check mark if they have played for the drawing. Kelley says there were a couple that were a little behind in paying but they “got caught up real quick” when they found out the group had won a big prize. The 10 men will each get $70,000 after taxes. An 84-year-old man won a one-million dollar prize in last weeks drawing. Iowa Lottery Vice President Mary Neubauer says that’s only part of a streak.

Neubauer says Iowa has had four one-million dollar winners this year, and one at the end of last year, so there have been five in the period of about one year. “That’s really unusual, I think we have had such a run of luck when it comes to Powerball winners,” Nuebauer says. She says this is what they hoped for when they added the one-million prize for the Powerplay option.

She says they redesigned the game in January when Florida joined the Powerball drawings, so that you always win the one-million dollar prize if you have all five numbers, miss the powerball, but have the Powerplay option. The other members of the group are: Tony Link, James Dorr and Richard Harter, all of Des Moines; Patrick McNaney of Berwick; Tom Cavanaugh, Donald Root and Wesley Beeghly, all of Ankeny; Bruce Michael of Altoona; and Donald Maas of Stuart.