You are here: Home / Business / Film Office “a complete mess” 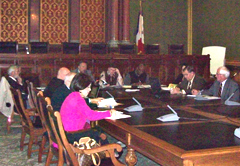 The attorney general’s chief of staff says investigators have found the state’s film office was a “complete mess.”

Governor Culver suspended the state’s film tax credit program last month and fired the director of the film office.  Eric Tabor, chief of staff for the state’s attorney general, says the state may challenge some of the $32 million worth of film tax credits already awarded.

“Clearly, this is a very important, complicated and difficult matter,” Tabor said by phone during testimony yesterday before the Legislature’s Government Oversight Committee. “Part of that difficulty is the incredibly poor record-keeping that was kept down at the Film Office and we’re trying to piece the thing together and really doing the best we can to unravel what can be called a complete mess.”

Tabor told legislators he and other investigators believe the law governing which movie and TV projects qualified for state tax credits was ignored and inappropriately applied.

“The reality here is that there’s millions of dollars at stake at a time when the state is broke and the legislature and the governor and all of us are trying to figure out how to deal with budget shortfalls,” Tabor said.

Read more about Tabor’s detailed explanation of what went wrong in the Iowa film office on O. Kay Henderson’s blog.