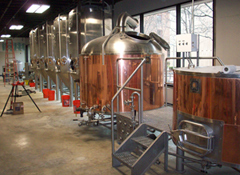 A former Maytag facility that was used to test washing machines in Newton is now the site of a brewery. Mason Groben started The Madhouse Brewing Company, moving copper kettle and stainless steel fermentation tanks into the former Maytag testing room.

“It’s actually worked out really well,” Groben said. “It’s a concrete floor, all draining floors, which is ideal because for a brewery you need to be able to wash everything down and you need nice concrete.”

Groben also runs the Jasper Winery with his parents. “With the wine, the work is very seasonal, so I do have a lot of months during the year that I’m looking for something else to do,” Groben said. “I figured, fermentation, I understand that. Why not try to make some beer?”

The Iowa-grown hops for Groben’s brews are still a couple years away, but Madhouse plans to roll out its pale ale and an American style wheat beer to grocery stores and bars soon after the new year. Groben named the pale ale “Pastime,” an homage to Maytag’s original wooden washing machine.

Newton Mayor Chaz Allen and others lobbied state lawmakers this year to change a prohibition-era law that prevented Groben from working for both a winery and a brewery.

“If you had asked me six years ago, when Maytag was here, that (Newton) would be a tourism capitol with the Iowa Speedway, the focus of all the green energy and now a brewery – I would have thought you’re crazy,” Allen said. “I’m hoping it becomes the next Budweiser.”

Twenty investors are hoping Groben’s business is a success, too.