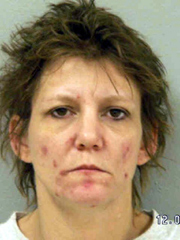 All four people lived in a house where a search warrant was conducted. Deputies say they found a meth lab inside and recovered a quantity of meth, marijuana, drug paraphernalia and “several wildlife parts,” which a state game warden seized.

Arrested were 42-year-old Kimberly Eckhadt, 38-year-old David Heidt, 40-year-old Kristy Heidt and 46-year-old Gregory Winter. All are accused of a felony charge of manufacturing a controlled substance. If convicted, they could serve up to 25 years in prison.

The sheriff’s office says more people may have been involved in the operation. An investigation is also under way to determine whether violations of Iowa Department of Natural Resources regulations occurred.