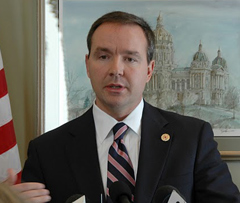 Democrats in the Iowa legislature say they’ve advancing what would become the country’s toughest law restricting corporate donations to campaigns for statewide office and the state legislature.

A recent U.S. Supreme Court opinion opened the door to direct corporate contributions to political campaigns.  Senator Jeff Danielson, a Democrat from Waterloo, says it’s important for Iowa to retain its reputation as a state that runs “clean” elections because Iowa is the first caucus state in the presidential selection process.

“We tend to be a testing ground for these new political activities.  There’s a lot of interest in Iowa politics,” Danielson says. “And we have to lead when it comes to strengthening our laws so that the average, everyday citizen’s voice can still be heard in that process.”

Senate Democratic Leader Mike Gronstal of Council Bluffs calls the bill is a work in process, as legislators try to draft new restrictions on corporate political activity in Iowa that would withstand any legal challenges.

“The one bright spot in the Supreme Court decision was that it seems to strengthen our hand in our ability to require disclosure,” Gronstal says.

Requiring an announcement at the end of campaign commercials, saying the name of the corporation that paid for the ad is one of the ideas.  Another would require corporations to notify their top shareholders or investors before a campaign contribution is given or an ad campaign is launched.  Senator Danielson admits, though, that the proposal is complicated because not all corporations operate the same way.  Some have scores of investors who own stock in the company; others are privately-held corporations; some have just one owner.  Danielson says the ultimate goal is to find some way to let Iowans see how corporations are raising and spending money on Iowa campaigns.

“We believe that transparency and disclosure equal accountability in the political process,” Danielson says.

While one Republican voted for the proposal in committee earlier today, GOP leaders say most Republicans in the Iowa legislature are opposed to any new restrictions on corporate donations.

“It appears, on the surface, to be a bill that would literally make it impossible to let corporations participate by placing onerous burdens on them,” says Senate Republican Paul McKinley of Chariton.

McKinley says corporations should have the same free speech rights that individuals have.  Republicans occupy 44 of the 100 seats in the Iowa House and 18 of the 50 seats in the Iowa Senate. The Democratic leader of the Senate predicts Democrats will pass the bill in both the House and Senate.

Hear what Democrats had to say about the issue: Democrats 12:19 MP3