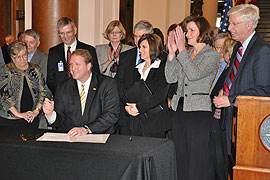 Convicted domestic abusers and those who’re the subject of a “no-contact” order will have to turn in their guns soon.

The governor has signed a bill into law that makes that new restriction effective July 1, 2010.   Laurie Schipper of the Iowa Coalition Against Domestic Violence says it took 10 years to convince legislators to pass the law.

“I really do feel like we have shifted a bit in attitudes and priorities,” Schipper says.  “As difficult as this bill was to lobby for, the conversation was different this time.  People were much more enlightened and aware and concerned.”

Schipper spoke briefly before the governor signed the bill into law today. “To every survivor and to all families of homicide victims who spoke up and in some cases risked personal safety to tell their stories — thank you,” Schipper said.  “We applaud your bravery for sharing your experience, your pain and your hope.”

A few Iowans who’ve seen their kinfolk killed by an abusive partner turned out for the bill signing ceremony. Jesse James of Dubuque spoke through tears as he talked about his daughter. “Our daughter, Holly, was murdered by her husband at Fort Bragg, North Carolina, on July 8, 2008,” he said. “She had two beautiful children and she had endured harassment.  She had done the no-contact orders and she was breaking away from the relationship when he chose to take a gun and shoot her in the head and end her life on this Earth.”

Although this law would not have helped his daughter in North Carolina, James predicts the lives of some Iowa woman may be saved when police take guns away from convicted domestic abusers and those who’re the subject of a no-contact order.

“It’s our greatest hope that it will help women in our state,” James said.  “We also believe that this law sends a message to everyone in our state and outside of our state that we here in Iowa are above letting this kind of thing happen.”

Critics say this new law sets the state on a slippery slope toward more guns restrictions.  “What I say to those folks is if you want to keep your guns, don’t beat up your spouses,” Senate Majority Leader Mike Gronstal (D-Council Bluffs) told reporters earlier today.

Governor Culver praised the legislature for endorsing the new gun restrictions for domestic abusers. “The bottom line is that this is the right thing to do,” Culver said just before signing the bill into law.  Several relatives of an Iowa National  Guard soldier who was killed by her husband last year attended today’s statehouse ceremony, too, and the governor hugged them after he signed the bill into law.