The Iowa Racing and Gaming Commission is hearing the proposals from four groups who hope to win a new gambling license. Tama County made the first presentation of the day. John Pavone, president of Signature Management, which is seeking the Tama County casino license, says their proposed Prairie Hills Resort and Casino to be built along the U.S. Highway 30 bypass near Tama-Toledo.

He says it will include 148 acres of land, an 80 room “next generation Holiday Inn Express” hotel, 500 slot machines, 18 table games and regionally themed restaurants.

He says the he says they would create a disaster relief fund for communities that might suffer a natural disaster such as the tornado that hit Parkersburg. That would include money for rescue, food, housing and clean up for those communities. Bearden says there would also be money for historical preservation grants for many of Tama County’s historic places that are in need of repairs. Bearden says they will spread the money throughout the county. 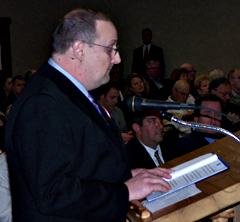 Bearden says they will work hand in hand with many of the other organizations to promote Tama County and will commit funds to the seven school districts in the county, which also reach out to four other counties.

The counties are Grundy, Marshal, Benton and Poweshiek. He says they will also use money for road improvements, emergency equipment, and storm warning sirens for Tama County residents.

Bearden summarized his presentation by asking the commission to give them a license. He says the casino will help Tama to continue to grow and prosper and the casino will allow them to do many things for Tama and the surrounding counties for years to come. Bearden says they will work with the Native American casino that is already in Tama to help both be successful.

Developers of a proposed casino in Webster County told the state Racing and Gaming Commission today that they can improve the community of Fort Dodge with the new casino, while at the same time not hurting the existing casino in Emmetsburg. Daniel Stevens, the C.E.O. of Peninsula gaming, says their past experience with their casino in Dubuque shows how they can make it work in Fort Dodge.

He says Dubuque gave them the opportunity to team up with the local community to create development in the Port of Dubuque with the Diamond Jo Casino of Dubuque at the center of the development. Stevens says they believe a partnership with Webster County to create the Diamond Jo Fort Dodge is the same opportunity they saw a decade ago in Dubuque. Stevens address the issue of hurting the casino in Emmetsburg, saying the non-profit group that will hold the license in Webster County would make sure that does not happen.

He says the Heart of Iowa Foundation has offered to indemnify Palo Alto County for any losses they might sustain from the new casino opening. Stevens says the casino also brings in a 10-million dollar license fee to the state and annual payouts of approximately 12-million dollars per year. And he says it will create 350 new jobs.

Lisa Shimkat of the Heart of Iowa Foundation told the commission the proposed casino has gained more support than when the vote was first taken to approve the license.

She says the 2010 study shows 59% of all citizens in their study favored the casino, and if everyone including the undecided’s, voted in favor, that would give them 67% approval of gaming. Shimkat says the county is in particular need of a boost to the economy.

Shimkat says the region lost nearly one thousand jobs last year due to a large manufacturer closing, plus she says they see other impacts from the economic downturn, with city budgets down, the community college freezing pay, and number of other issues. Shimkat says the new casino in Fort Dodge would be a major boost to the entire region.

Shimkat says they add the casino salaries, at over $12-million, the spending and charitable giving from the casino in the area of over $22.5 million. She says they believe those dollars would multiply by three times as they spread out into the community. The new casino is proposed for the intersection of Highway 20 and 169.

The proposals from both Tama and Webster County also included videos and testimonials from local citizens and leaders on the impact they think the casinos would have on their areas.

Presentations are also scheduled this afternoon for casino proposals from Ottumwa and Lyon County.