You are here: Home / Sports / Hoffpauir hopes stay with I-Cubs is brief 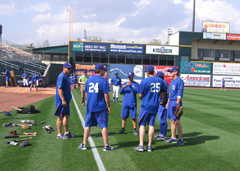 Micah Hoffpauir hopes his stay in Des Moines is a brief one. The outfielder batted .239 for the Chicago Cubs in 2009 but did not make the team coming out of spring training.

He is back with the Iowa Cubs and was 0-3 in their season opening loss to Nashville on Thursday night.

Hoffpauir says he’s glad to still have a job, but Des Moines is not where he wants to end up in his career. He says the first time he came to Iowa was in 2004 and he says you don’t want to stay for a real long time.

Hoffpauir says he hoping to fill a role in Chicago, he says there are parts of the game you have not control over and the last roster spot went to a guy who backs up at third base and has a good bat. Hoffpauir says when he gets another chance in Chicago he will try to do what it takes to stay there.

He says he has proved that he can hit in the big leagues and says he came in with a new role of coming off the bench and says it wasn’t something he was prepared to do. Hoffpauir says that’s something he has to work on.

The I-Cubs and Sounds continue their series in Des Moines this evening.