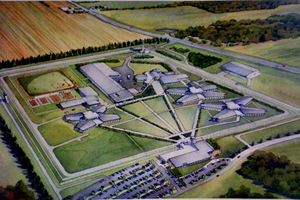 Iowa Department of Corrections officials will break ground on a new maximum security prison in Fort Madison this morning.

The facility is expected to be ready to house prisoners sometime in 2013. The existing prison has 550 beds while the new building will hold 800 inmates.

Baldwin say it will be a “direct supervision” institution – meaning staff will interact more with prisoners and boost treatment programs.

“Our goal is to have (inmates) re-enter not only the institution system at a lower classification level, but also – except for the lifers – to re-enter into society and have less risk of re-offending,” Baldwin said. The facility in Fort Madison is used to house violent and repeat male prisoners. Baldwin says the new prison will save the state a lot of money on energy bills.

“It is going to be a LEED Gold Certified prison,” Baldwin said. “I think there’s only one or two (other prisons) in the United States that have that level of efficiency. We think we’re going to save approximately a-half-million dollars per year on energy.”

Plans to replace the 171-year-old Iowa State Penitentiary were accelerated shortly after two inmates escaped from the facility in 2005. The escapees were captured a few days later.