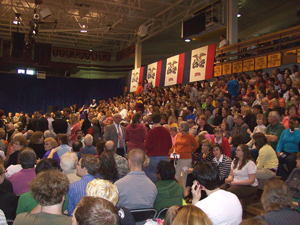 Over 2,100 people gathered in a gymnasium in Ottumwa late this afternoon for a “town hall” meeting with President Obama.

Obama spent about an hour on stage in Ottumwa and he began by reminiscing about his 2008 Iowa Caucus victory.

“It is just good to be back in Iowa.  If it weren’t for Iowa, I wouldn’t be president,” Obama said, as the crowd applauded and cheered.  “I believe that.”

Obama touched on a variety of topics, from health care to trade policy to deficit reduction. He also criticized Republicans in the U.S. Senate for taking a procedural vote that blocks senate debate on a financial reform bill. “It’s one thing to oppose reform, but to oppose just even talking about reform in front of the American people and having a legitimate debate — that’s not right,” Obama said.

Obama said consumers need to be protected and Wall Street firms that take “irresponsible risks” need to be held accountable. “I’m not going to let this effort fall victim to industry lobbyists who want to weaken it and water it down and kill it and snuff it out and stomp on it and whatever else they want to do to it,” Obama said.  “We can’t let another crisis like this happen again and we can’t have such a short memory that we let them convince us that we don’t need to change the status quo on Wall Street.”

A student in the crowd asked Obama about immigration, and Obama said there was a need for immigration reform and it must be a bipartisan effort.

“Washington likes to act like this is all a political game,” Obama told the crowd in Ottumwa before he opened the forum to questions from the audience. “…You don’t care which party comes out on top politically in any of this stuff. You just want us to live up to our responsibilities like you do. You’re not interested in whether it’s a Republican plan or a Democratic plan. That’s what our administration’s been trying to do.”

Obama toured a factory in Fort Madison that makes the blades for wind turbines and he made two stops in Mount Pleasant before arriving on the Indian Hills Community College campus in Ottumwa. The college softball team was in the hall more than two hours beforehand, waiting for Obama’s arrival. Nicole Steinle, the team’s catcher, was too young to vote for Obama in 2008, but her parents both did. “I’m a big Obama fan,” Steinle said, “a big supporter of him.”

Jordan Grell of Moville, Iowa – an infielder on the Indian Hills softball squad – was old enough to vote in 2008 and she voted for Obama.  “I’m from a small town so this kind of stuff doesn’t happen very often and for a small college like this, it’s really big,” Grell said. “It’s very exciting.”

Grell, though, is “concerned” about the way Obama is being perceived by the general public. “It takes a while for change,” she said, “so I think he’s headed for some kind of change in a good way.”

Thirty-four-year-old Duane Fuller made his way to Ottumwa from Muscatine.  Fuller has been an Obama supporter since early 2007 and he was invited to be part of a group that sat behind Obama on the stage. “It a very hard time right now in Iowa because a lot of people are out of work,” Fuller said.  “I myself have been unemployed or underemployed for a year and a half and I know it’s hard to find a job and that’s what the president’s here talking about and it speaks directly to me and hopefully we’ll be able to get something done about it.”

Forty-five-year-old Kevin Pope of Ottumwa was unemployed, too. Once his unemployment benefits ran out, the only job he could find was a part-time position. “People working part-time can’t find a full-time job,” Pope said.

Pope describes himself as a “lifelong” Democrat and he was invited to sit on the bleachers positioned just behind Obama. “How exciting is that?” Pope asked. “Irregardless of who the president is, if you have an opportunity to see this, why not?”

Obama stopped in Mount Pleasant on his way from Fort Madison to Ottumwa.  The president visited an organic farm, then had a piece of rhubarb pie and a cup of coffee at Jerry’s Family Restaurant in Mount Pleasant.